My last blog was before the exhibition where Michigan was on display and I have to say it created considerable interest.   At that time I had decided on  modifications which I hoped would share the load between battery and engine but they had not fitted  or  tested on the track.

This picture shows the green resistors mounted at the front  behind  the fan because they will be dropping a bit of load and may get quite warm.  They should reduce the alternator output at high currents which will maintain the load on the engine comfortably below its rating. 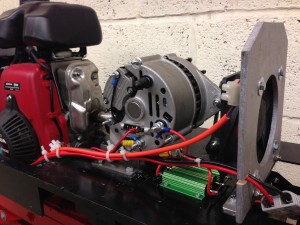 New  batteries were also fitted.  Previously we had been using old discarded golf buggy batteries in the belief that the engine would do all the work and that these old batteries should be sufficient.   However it seems that he batteries were completely dead and now that we wanted the batteries to share the load we fitted new lead/acid motorcycle batteries 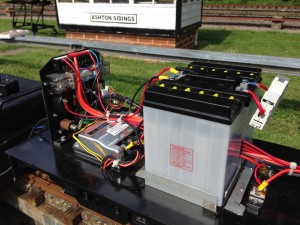 With some trepidation we wheeled Michigan out, hitched up some carriages, started it up and a few of us set off.     To everybody’s delight it performed exactly to plan.   Plenty of power when pulling away with very little slip because it is quite a heavy loco. Then, on opening the throttle, away it went to speeds well in excess of normal running with no strain on the engine.   Observing the alternator output current and controller input voltage it could be seen that  the full 28 volts were maintained until 12A and they then tailed off down to battery volts of some 25v when the battery started to assist.  At no time was the engine under any undue strain.   When we slowed or came to a halt the ammeter showed that the alternator then proceeded to charge up the battery back up to it’s initial state.   All exactly as planned.

We decided it was time for a full trial so we loaded it up with 9 of our heavier members, which together with the trucks I calculated to be about 1 ton,  and off we went.  It sailed round like a dream and so we continued for two full laps at speeds I felt would not frighten our chairman unduly but again well above those required during normal passenger running.   On completion we all congratulated  ourselves and I continued running to check further items and make sure everything was going to plan. 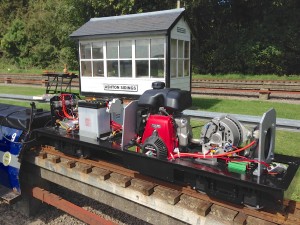 I then realised that I had not taken a photograph of this historic event but was delighted to receive by email that evening a photograph taken by Andrew Harding’s good lady who was waiting for Andy in the car park and here it is.  Thank you Mrs H. 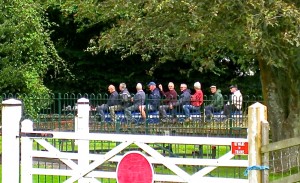 Gerry and Arthur are now proceeding on the preparation of the body.  Two coats of primer have been sprayed on followed by the final coats of green and yellow.    Some rubbing down and polishing is now necessary before the red stripes are applied and we can then start fitting all the knobs and whistles which will make it look like a real model engineering locomotive.

Just in case you have forgotten, this is how it will finally look. 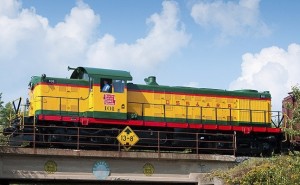