Turned up at the track this morning expecting the field would be a swamp, and we would probably have to park on the main car park near the cafe and pay a £1.  But was pleasantly surprised to find our car park, whist being a little damp, was quite OK for parking and the “village green” was also not too bad.  Good news for Santa!

The only damage we found was a branch down and the small attractive maple broken off at ground level which had also caused some damage to the adjacent tree.  Alan Grinsted and his gang set to work and soon had it cut into pieces and tidied up. The mower/tractor and landscaping tools had been away to George Carrs for overhaul and were duly delivered today much improved by a little T.L.C.

We have been concerned about fitting in the proposed extension to the carriage shed in case it came too close to the raised track.  The possibility being that we may have to “cut off ” the rear corner which would give a very awkward roof line.  Alan Hooper who is doing the design for us came along and we  decided to get the measure out and check the clearance.    We  erected a piece of board simulate the wall so that drivers and passenger can get a good idea of where the building would come and we drove a train round to see how it looked. We also checked the clearance against the tunnel entrance to see how it compares.  You can see from the pictures below that we have quite a bit of clearance but just to be sure we will leave it up (weather permitting) for Santa Special. 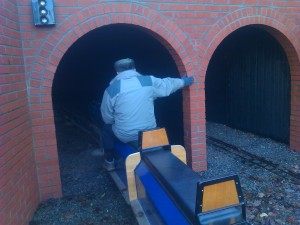 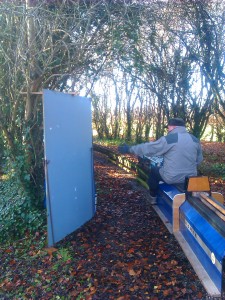 Many of you will be aware that Mike Keighley is in hospital following a major operation. The latest news  is that all went well and he hopes to be out in a few days once they have established that all systems are in full working order.  We wish him well and a speedy recovery.   I will update the blog when I have any further news.

Latest news on Saturday 1st December.       Mike is now staying at his cousin’s in Upwell,  feeling much better and sounds very bright.  He has been out for walks and hopes to make it to the club next Friday 7th December

Just heard from Geoff Hinbest who is struggling with his hip but now driving and hoping to be with us on 7th December.