A Day for Reflection

Busy getting ready for our first running day of 2013 but news of the loss of Geoff Sheppard meant that a there was a somber mood in the club hut.

Geoff was a pillar of support , a personal friend and will be sadly missed by me, the club and club members and throughout the model engineering world where he had tremendous presence and was known and respected by all.

Still work had to go on preparing and testing the rolling stock, signals and track ready for our passengers on Sunday when Ian Biddiscombe will be duty manager.  With the cold wind and threat of a sharp frost we felt it wise to leave the water turned off and we will have to go round and restore it on Sunday morning.  The forecast for the weekend is dry with some sun and hopefully the wind will drop and it it will be a bit warmer.  Ashton Court always seem to catch the worst of the cold wind,

I remembered the hot cross buns this week and they were warmed and eaten with our coffee and tea.     David Hathway checked out Telford and gave it run to make sure the batteries were recharged and tested the signals on the way round.  All ground level trucks are operational but unfortunately the testing team on the raised track found two faulty  trucks.  One had a seized bogie and the other fouled the rubbing rail  so had to be withdrawn from service.   Derek Taylor is working on two new carriages and this will allow us to overhaul the other trucks in turn. 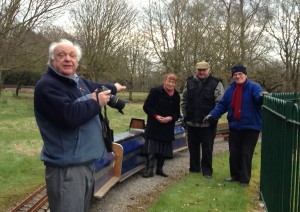 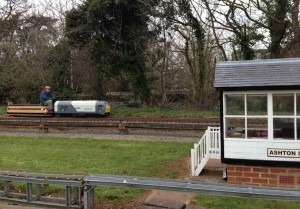