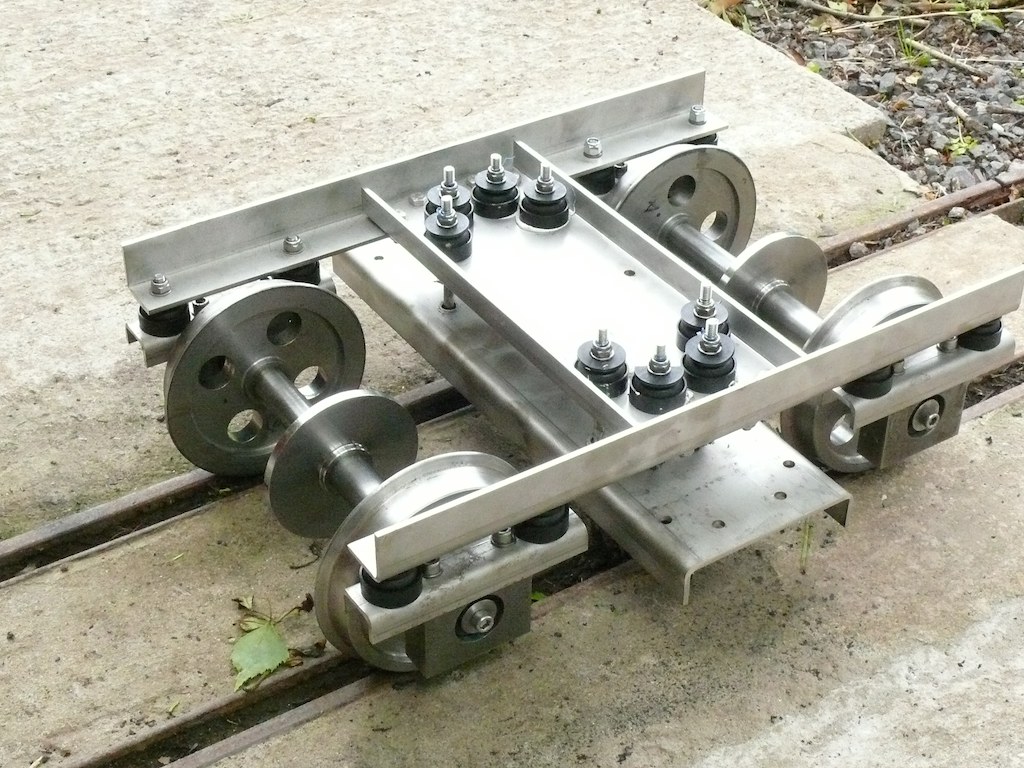 A milestone has been passed. The first production ‘Hudson-James Mk III’ has been assembled, and passed its initial track tests with flying colours. It negotiated all our points and ‘difficult’ track sections at high speed without derailing. But I lie, (a little). On the carriage shed siding, there is a build up of ballast, and some loose stones caused it to lift off the rails; but it obligingly (and repeatedly) re-railed itself once the obstruction was passed. Twigs and rubbish on the rails had the same effect; a good result.

Next job is to fit the brake gear and finalise the linkages, and then to complete the second bogie. Many thanks to Andy Harding who turned up some axles, which were all that remained outstanding to get us to this stage.

Meanwhile, Phil Faulkner has been grafting away around the carriage shed, stripping and repainting the chassis, which is now ready to accept the two new bogies- thanks Phil. Then we can fit the refurbished body of carriage no. 201, and carry out the real testing, with a full load at maximum speed.

When this vehicle enters traffic, we can then get on with completing the remaining 12 bogies, for a rolling programme of installation.

For those who don’t know, these bogies are a radical new design, with swing-link suspension and self-steering wheelsets, based heavily on the work in 5” gauge by David Hudson, which was in turn inspired by modern developments in full size. Ron James adapted the Hudson principles to 7¼” gauge and his Mark I and Mark II prototypes have proved themselves in service at Ashton Court over several years. Ron and Phil Bridgway did most of the initial ‘heavy lifting’ to get the Mark III project to its current stage. Mark Phillips did some of the drawings; along with Bernard North. Kevin Slater and David Giles remanufactured the wheels after the first batch failed inspection. Bert Roberts, and numerous others of the Friday gang have been doing some of the smaller in-house workshop operations.